Well bear cubs, IIWPA... is about to change, hopefully for the better. I have partnered up with Pariah Stevo and Wiley the Nord to create Da Deff Komp'ny, a new superblog created by combining our three previous blogs. The new site will still cover the latest and greatest of 40k, and will contain everything you know and love about IIWPA..., and more.


This new transition means more bloggers in one place, meaning more posts, meaning more stuff for you to enjoy! So if you liked what you read here, please check out our new blog. I hope you have enjoyed what I have done here on this humble lil site, and I hope you continue to enjoy all the new stuff over at Da Deff Komp'ny! Hope to see you there!!!

Abaddon may be my favorite named character in the game. He's an IC, he is tough, durable, and can be just absolutely ridiculous in the assault phase, able to go toe to toe with just about anything in the game. The problem is, his model doesn't do him justice. No, let me rephrase that - His model is absolutely terrible.


So years ago when I scored the deal of the century and payed 130 bucks on eBay for an entire Nurgle army (50+ Plague Marines!!), I decided to make my own. At that time, I was wanting to stay pure Nurgle, so I took my Typhus model and created one of my favorite retarded ideas to date - Typhusbaddon.


Yes the almighty Typhusbaddon saw many a tournament, game night, victory and ass whoopin. As my Chaos horde began to grow, however, being "pure Nurgle" began to become less important. I had already phased out my Nurglezerkers (don't ask), and Typhusbaddon's run was coming to an end.


So I picked up a terminator lord/sorcerer kit, and ordered a Skulltaker model from which to procure a suitable weapon from which to make the mighty Drach'nyen. I have had him assembled for over a year, but just now finished painting him. So here he is, the Warmaster himself, The Colossus of Clout (The Colossus of Clout!) - no, I am not above Sandlot references - Abaddon The Despoiler! 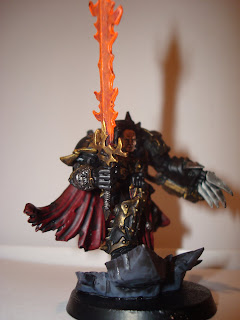 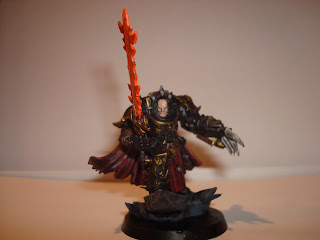 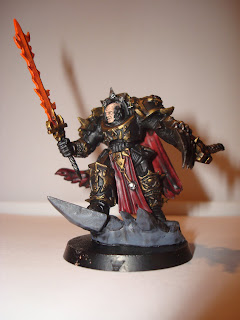 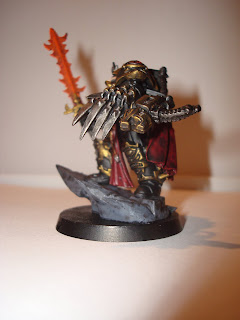 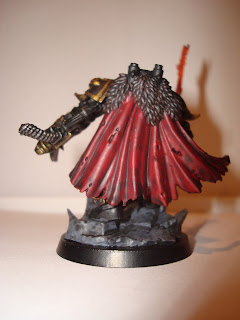 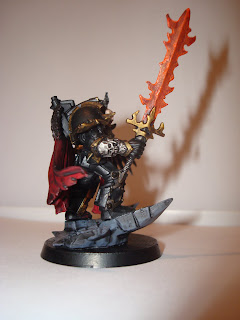 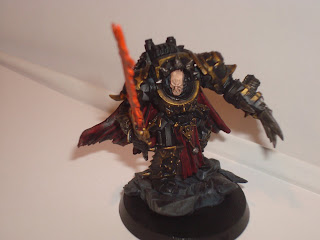 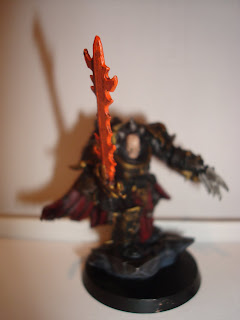 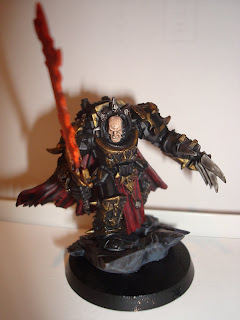 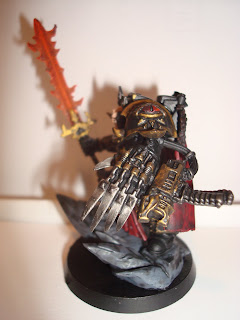 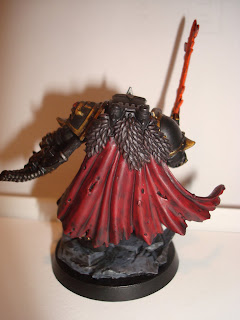 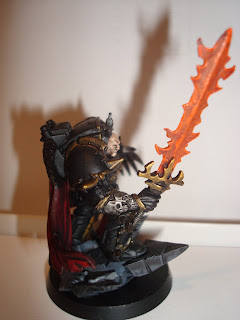 Sorry bout the quality of the pics, the lighting is kinda suck :(

Back to Business/Fun With Chaos!!

Ok, sorry for the long layoff, but in the break The Grizz became a Homeowner!! He is now only about 20 minutes from his favorite game store, Dicehead Games! So unpacking, painting, moving, all that jazz has really put a damper on the 40kness for a while. But now The Grizz has his very own subterranean 800 sq.ft. Bear Den all to himself! So yes, mucho excitement on my part.


Well this weekend I ran a game out with my good buddy Pariah.Stevo, who debuted his new to him Black Templar. He ran a 16 terminator/6 Speeder Typhoon list, that promptly put my wolves in their place. I have been playing a lot of shooty shooty lists lately, and have had a lot of fun with them. One thing I have had some issues with, however, is termie squads and AV 14. Shooting the poowater out of them is not necessarily the most effective method.

Well this got my mind thinkin. Why don't I start playin around with some just absolutely nasty lists, with that gross center? You know, somethin that is nothin but pure fun to throw down somebody's throat. Why not try some termies and AV 14 myself? Everyone loves a good beatstick, Well when I think of beatsticks, My bestest friend Abaddon always comes to mind. Well the problem is that when you take Abaddon, you have to take a Land Raider, and I always have problems fitting a LR in a chaos list.


So, what if I build a list centered around the LR? Then the cogs started tickin. So I designed a Chaos List unlike anything I have ever played before - A Dual LR list. I just played a game by myself (something I do often, actually really helps your gameplay) matching up the Chaos with the Space Wolves, Pitched Battle, C & C.


Let me just say that the results were more than surprising. The Chaos were one long fang squad away from a complete wipe, and controlled both objectives. I am still shakin my head about it. The List -

2x10 CSMs
---Fisty Champ, ML, Rhino
2x Oblits
1996 pts.
No it does not have a world of shooty, but throw those two LRs up there and if your opponent can't stop you, then its bad news bears all up in here. I will be playtesting it the next couple weeks, maybe I can get up a new batrep of them for y'all to enjoy! Till next time!!
So, glad to be back! What do y'all think of the list! Love it? Hate It? Either way let us know below!!
Posted by Grizzly Adams at 7:25 PM No comments:

Hey Bear Cubs, Grizz here. Was able to swing down to Dicehead Games today and get a game in against my good buddy Wiley the Nord. He was needin to practice for the 'Ard Boyz this weekend, and I'm always in the mood for a good game so I added 500 points to my Space Wolves and headed to Cleveland.

---The Mission---
40K Ard Boyz Preliminary Scenario 2:
Whoz got da Motz!
Mission:
Control as many objective counter as possible.
Objective:
This scenario uses a modified Seize ground (page 91) missions.  Please note that there are
always 5 objectives, DO NOT ROLL.
Before determining who goes first an objective marker is placed in the center of all four
table quarters.  The fifth and final objective is placed in the direct center of the table.  The
objective in each Deployment table quarter is worth 1 point.  The objectives in the empty
table quarters are worth 2 points and the objective in the center of the board is worth 4
points.
Deployment:
Spearhead as seen on page 93 of the main rulebook
Length of Game:
This game last 6 turns, or until time is called, so that each player completes the same
number of turns.
Special Rules:
Reserves (Page 94)
Deep Strike (page95)
Night Fight (Turn 6 Only)
Seize the Initiative (page 92)
Massacre:
If a player has 5 more objective points than his opponent.
Major Victory:
If a player has 3 more objective points than his opponent
Minor Victory:
If a player has 1 more objective points than his opponent
Draw:
If both players have the same number of objective points the game is a draw.
Battle point modifiers:
+1 If you control all the objectives at the end of the game.
+1 If your opponent has no units in your deployment zone.
+1 if all your hq choices are alive at the end of the game.
+1 if you kill all of your opponents Heavy Support choices. (If your opponent doesn’t
have any heavy supports then you automatically get this point.
---Lists---
2500pt Space Wolves
Wolf Lord
---Runic Armor, Belt of Russ, Wolftooth Necklace, Thunderwolf Mount, 2x Wolf Claws, Saga of the Bear
3x Thunderwolf Cavalry
---1x BP/SS, 1x BP/SS & Melta Bombs, 1x TH/SS
3x Wolf Guard
---Combi Melta/Power Fist
3x9 Grey Hunters
---Mark of the Wulfen, Wolf Standard, Meltagun
---Rhino w/ HK Missile
5x Grey Hunters
---Plasmagun
---Las/Plas Razorback w/ HK Missile
3x Rune Priests
---BP/RW, Living Lightning, Storm Caller, Chooser of the Slain
---BP/RW, Living Lightning, Murderous Hurricane, Melta Bombs
---Storm Bolter/RW/ Living Lightning, JotWW
3x6 Long Fangs
---2x LCs, 3x MLs
---Las/Plas Razorback w/ HK Missiles
---------------------------------------------------------------------
2500pt Blood Angels
Terminator Librarian
--- FW/SS, Fear the Darkness, Unleash Rage
10x Assault Terminators
---10x TH/SS
Sanguinary Priest
---Bike, Melta Bomb
6x5 Assault Marines
---Meltagun
---AssCan Razorback w/ HK Missile & Searchlight
2x5 Vanguard Vets
---PF, 4x Melta Bombs, Jump Packs
3x Dreadnoughts
---TL Autocannons
Alright, now that you know the scenario and the lists, On to the game! I won the roll off and decided to go first.
Well it turned out to be one heck of a game, with the mission objectives coming to a dead draw, with me scrapin by with 3 of the Battle Point modifiers to Wiley's 1. I am still lovin the Wolves, their versatility is unrivaled. The Thunderwolf Lord is incredible, with an unreal threat range and substantial killing power. All in all a successful day.
Well, we finally got another video batrep up, sorry it took so long. Questions/comments/criticisms/critiques/whatever the hell else you have to say, just put it below, Thanks for Readin!!
Posted by Grizzly Adams at 10:57 PM No comments: 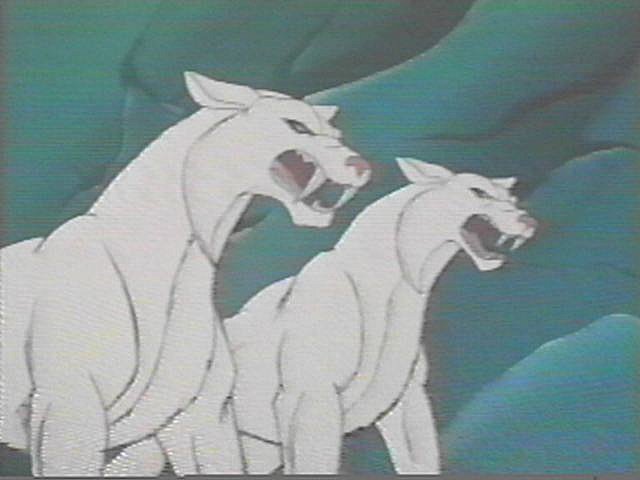 Well, I have been wantin to run some thunderwolves, but I haven't found any models that really tickled my fancy. I've seen the Mythicast, the Russian wolves, all the ones from eBay, nothin tickled my fancy. So I began the arduous journey of making my own. I slaved over the desk, fought with the green stuff, stayed awake for nights on end. I have poured my heart and soul into these, and I believe it shows. Without further ado, I give you my Thunderwolves. 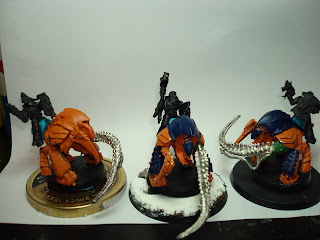 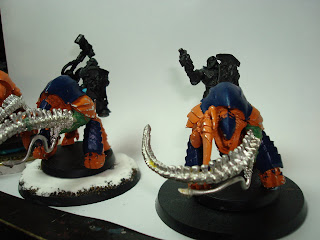 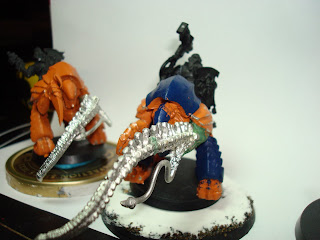 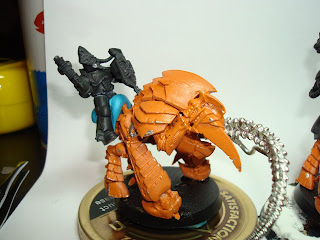 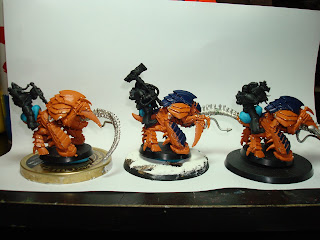 Ok, so by now you probably know these are nothing more than a proxy/filler. I am wanting to try out some TWC's, but ain't really sure how and how many. So I threw these bad boys together in order to have something on the table other than empty bases. I ran out of the big bases, but as luck would have it, a Copenhagen lid is the exact same size. Hopefully I will get a chance to try them out tomorrow. Till next time!
Posted by Grizzly Adams at 6:22 PM No comments:

Hey all, got a game in last week against my good buddy Wiley the Nord from Ghostlight of Commoragh. I got to try out my newest list versus a tourney style DE army. He decided to do a battle report and post it on his blog.


Before going any further...


The game was a blast, as is every game between Wiley and myself. Basically the first turn set the tone for the rest of the game. I was able to weather the storm of his 1st shooting phase, and that allowed me to bring all my guns to bear. I made a lot of cover saves, and my shooting throughout the game was very effective. I really love the ATC mission, as it really forces you to make three dimensional lists, and it gives you a good idea on how your list will fare in any given situation.


Thus far this list is 3-1-0. It is playing consistently and I have really enjoyed it. I think at some point I am gonna want to put some TWC in it, something to counter all the deathstars out there. We shall see, but for now I am really enjoying this list!
Posted by Grizzly Adams at 1:26 AM No comments: 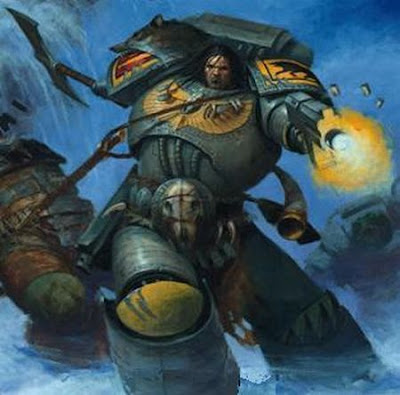 Well Bear Cubs, I got some stuffs to show off. I played a game against my good friend Wiley The Nord from over at Ghostlight of Commorragh the other day, had a blast, (batrep to come soon!) and I got to play with my Space Wolves. I got them all out and surveyed the list in all its glory, and became dismayed as I cast my gaze upon it. After being used to playing my Blood Angels, who are mostly painted, my completely unpainted Wolf army was quite depressing.


So, for the past 2 days, I have been working feverishly to make some headway on my new crush, the Boys from Fenris. After some long nights, some sore thumbs from opening paint pots, and a slight case of carpal tunnel, I have finished my first squad. Now, these boys are not Golden Daemon by any stretch, I think they are sufficiently table top quality. Let me know what you think! 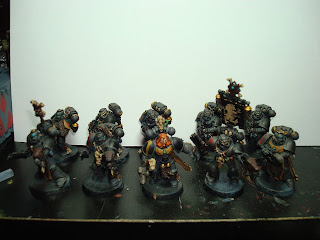 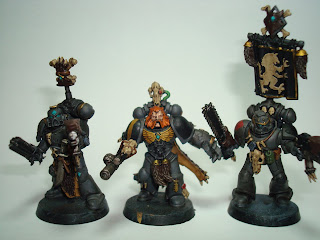 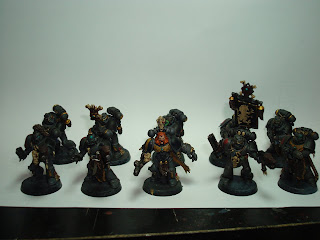 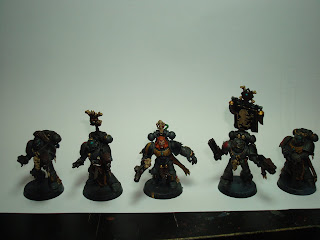 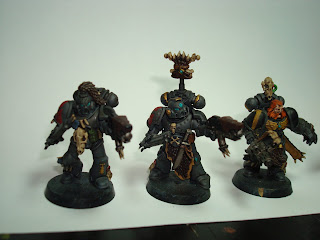 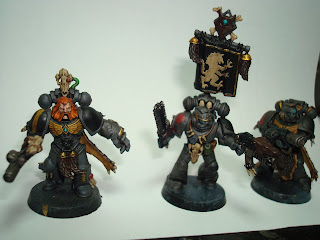 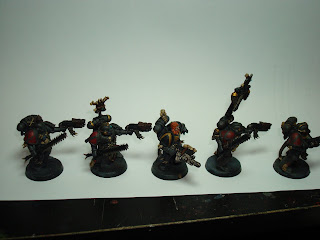 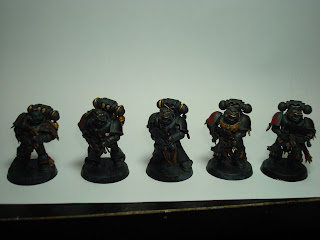 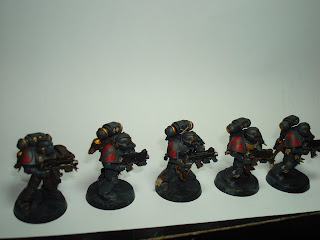 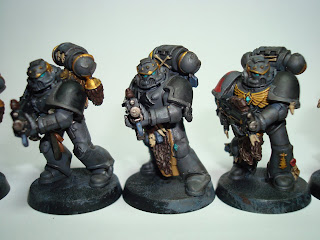 Keep checkin out IIWPA... For the first Batrep with the Wolves!
Posted by Grizzly Adams at 3:02 PM No comments:

Grizzly Adams
Tennessee, United States
A 40k gamer and Marine player since 1998, he is involved with all parts of the hobby, from painting & modeling, to tournament and casual play.